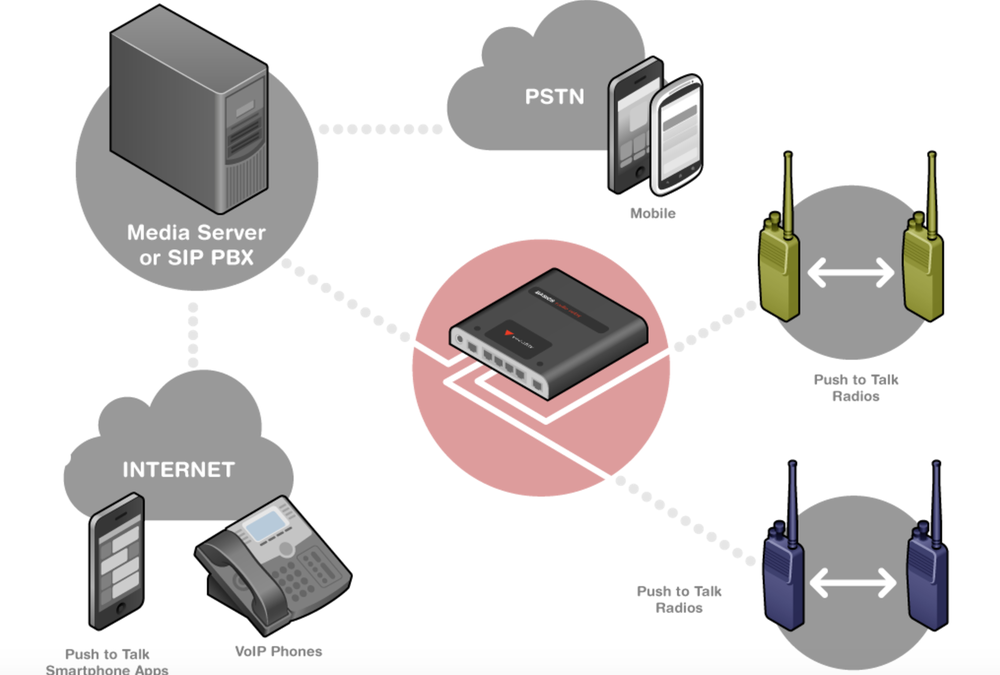 Radio over Internet Protocol (RoIP) is essentially the same technology as Voice over IP (VoIP), except that RoIP adds push-to-talk (PTT) capability to voice communications over the internet. At least one node in an RoIP network is a radio, which is connected to other nodes in the network via IP. These nodes can be any communication device that’s accessible over IP, including two-way radios, dispatch consoles, smartphones, and computer applications.

The benefits of RoIP solutions fall into one of the following three categories:

Traditional radio systems consist of dedicated microwave transmitters and leased telephone lines. The replacement of these networks with ones that use IP technology generally results in the reduction of operating costs over the long term, especially as the network’s size increases. This trend is primarily due to the continually increasing functionality and decreasing cost of packet-switched network equipment and software. For example, the Vocality RoIP      allow users to connect several two-way radios directly into each unit. The unit then converts all of the PTT conversation and associated signaling into IP traffic, which it then transmits over the internet.

A traditional radio system uses a hub-and-spoke architecture that’s inherently less reliable than the network approach that RoIP devices use. The loss of a single node in an RoIP network won’t render the entire network inoperative because multiple routes are available between nodes, which isn’t the case with a hub-and-spoke architecture. RoIP also uses a variety of technologies to make voice communication clearer such as de-jittering, packet aggregation, and silence. Efficient signal compression saves bandwidth without sacrificing communication quality.

Vocality RoIP also use the Primary, Alternate, Contingency, and Emergency (PACE) methodology to maximize reliability while minimizing bandwidth. In contrast, straightforward gateway applications lack this functionality. These capabilities make Radio over IP software particularly beneficial for essential services such as healthcare, law enforcement, and utilities that require reliable communications over a large area.

RoIP provides greater support for stationary users than traditional radio systems. Users like dispatchers and supervisors often find the use of land mobile radio (LMR) challenging because computer equipment can create interference. Furthermore, personnel at Emergency Operations Centers (EOCs) often use different radios, which isn’t an issue when they use RoIP devices.

RoIP provides many communication benefits for workers in remote areas compared to traditional radio systems. The larger service area is generally the result of advances in technology and protocols, as is the improved reliability of RoIP. The redundancy of RoIP networks also minimizes the impact of individual nodes becoming inoperative. Improved support for stationary users is another major advantage of RoIP networks over traditional architectures. If you’re interested in RoIP devices or would like more information, contact our team at SkyMira today.