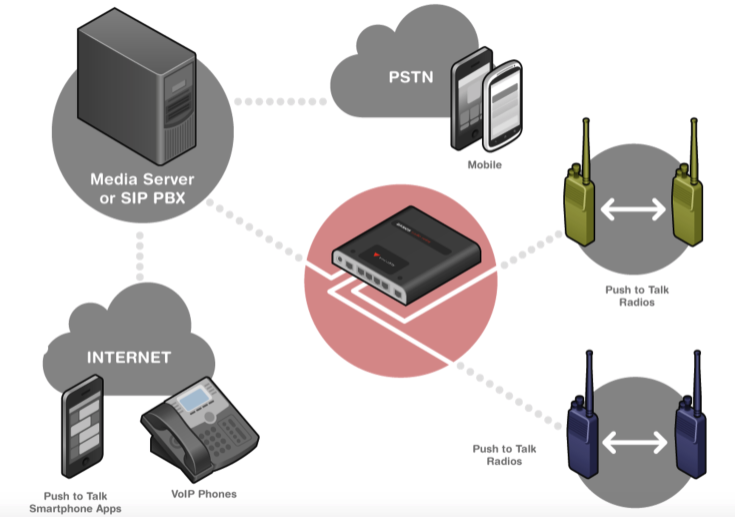 RoIP stands for Radio over IP (Internet Protocol) which simply means the radio signals are transmitted via internet connection to increase their range and reliability.

Instead of relying on traditional radio signals which quickly deteriorate, RoIP connects land mobile radios using the internet. This gives them a flexible range which can reach across a large building or around the world.

Essentially, RoIP serves as a virtual radio repeater with an infinitely expandable range. Because of this, RoIP connected LMR radios are not limited by traditional coverage and range problems.

One of the biggest problems with traditional radio communication is dead spots – inside buildings, beyond natural barriers, and where radio towers are down. Natural disasters often damage radio and cell towers impeding communication when you need it most.

Unlike traditional radio communication, RoIP is not limited by dead spots and gaps in coverage. Radio over IP uses internet connections which have unlimited coverage potential. The dependability of internet connections even during natural disasters ensures that you can use RoIP radios to communicate quickly and efficiently when it is most necessary.

RoIP connections are also more reliable because they are based on an IP network model instead of a spoke-and-hub model. In traditional radio communication, a radio tower serves as the hub and each connected radio is connected directly to that main tower like spokes on a wheel. If the hub goes down, communication is lost.

RoIP radios use an IP network model which offers multiple connection routes to send PTT communication to interconnected devices. This means that if one hub goes down, communication can be redirected around it.

Both of these factors – greater coverage and the IP network model – serve to make RoIP substantially more reliable than traditional radio communication while retaining PTT functions.

Another key feature of RoIP is that it can connect traditional LMR radios with other internet connected devices. 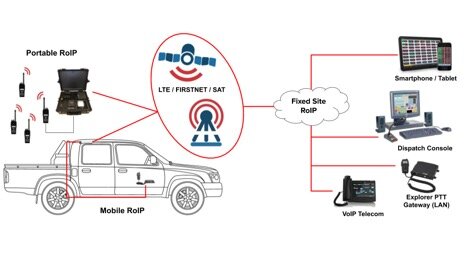 Want handheld portable and vehicle mobile radio users to be able to PTT with smartphones, computer aided dispatch consoles, or VoIP desk phones? No problem. RoIP enables interoperability between all of these devices and more so that you can mix and match to meet your requirements. This inherent flexibility allows you to use RoIP across your team to ensure good PTT communication.

Because a well-implemented RoIP connection feels the same as a traditional radio network your team is accustomed to using, users won’t know they are using RoIP. Regular Push-to-Talk communication can carry on uninterrupted but with added features such as GPS tracking

At Skymira we understand how RoIP technology impacts an organization’s operational workflow. With an expert service team, large portfolio of hardware, and access to satellite, LTE and FirstNet networks… We make RoIP easy.

Contact Skymira for more information about how RoIP can solve your communication challenges.